On the occasion of the 40th edition of Vini Milo, I was invited to attend a press day to discover Milo and its territory, wine makers, native carricante grape, but most importantly, Milo’s white wine.

Etna D.O.C. Bianco Superiore must contain a minimum of 80% Carricante.

Requirements are also that the grapes must come exclusively from the Milo area.

Why? Because all Salvo’s vines are Alberello trained. 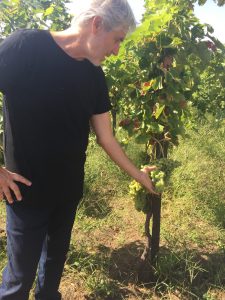 Alberello is a traditional Etnean training method and as you may imagine, ‘traditional’ means no short cuts. Each vine must be trained, pruned and harvested manually by professional locals who know the territory and this vine training system. Each vine is trained on a chestnut post.

The vines are not the only tradition respected at I Vigneri. The vineyards are all terraced with lava stone dry walls. Salvo explained how this helps avoid landslides when there are heavy rains. These terraces slow the water flow down the slope; and the lava stones, although compact, keep the soil well drained and allow the water to filter to the lower vines.

Salvo describes his wine as an ethical wine because he provides work to the local community. All his staff are from Milo because they know and understand the territory. They know how the Alberello system works and they know how to build and maintain a lava stone terrace wall. The purchase of the chestnut poles also provides work for a local supplier.

The Benanti family for generations were pharmacists, until in 1988 Cavaliere Benanti began a keen interest in wine making. This interest was no half-hearted hobby. Benanti sought expert advice and employed a young local oenologist by t 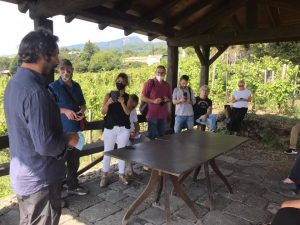 he name of Salvo Foti. In 1990 they produced their first bottle of wine! Today the family business is run by his twin sons Antonio and Salvino. Now, as then, the Benanti philosophy for making Etna white wines is 100% carricante grapes, 100% stainless steel tanks for maturation thus allowing for a wine that truly expresses the unique volcanic territory, is complex and ages well.

Antonio wears the hat not only of wine producer, but also that of president of the Etna DOC consortium. In this later role his objective is to educate consumers about this special volcanic territory and to promote the various contrade (zones), so that each has its own unique identity, as with other more historically known wine growing areas. He says that Etna is a niche and should be celebrated as such.

Andrea is one of the new generation of wine makers on Etna. Eredi is Italian for heirs: he and his cousins are the heirs to a small, but flourishing vineyard with pre-phylloxera vines. 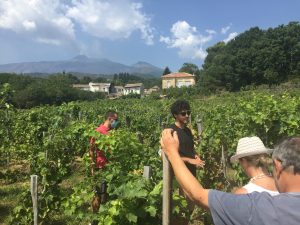 In the 70s, their grandfather decided to set to work and clean up the abandoned vineyards that are today the site of this winery. Andrea told us how the grandchildren had to convince their grandmother to let them produce wine. Etna has a long history of vineyards, however at that stage there were very few who bottled their wine. She would say ‘if you make wine you will have to wait – sell the grapes and you will get an income immediately.’ It seems that they did a great job in convincing nonna, as recently they bottled their first production.

Barone di Villagrande is a luxurious boutique wine resort in Milo. Founded in 1727, its winery will soon celebrate 300 years. It is possibly Etna’s oldest wine making family. The resort offers four guest rooms, a stunning pool overlooking the vineyards and a restaurant where it is possible to savour dishes made with local ingredients including homegrown vegetables.

As I admired the view over the vineyards, I noticed that even though we are at 700 metres, I could see the coast below. Antonio Benanti’s words came to mind regarding what a unique territory Milo is, with its mountain climate as well as sea breezes.

Upon arriving at Barone di Villagrande we were invited to taste a number of the Etna Bianco DOC Superiore.

Milo is a small territory, yet through this tasting we were able to appreciate a variety of expressions of these volcanic slopes.

100% Carricante, refined for 6 months in the bottle

Lunch at Barone di Villagrande is served under the shade of the trees.

As a gran finale, energetic young chef Vittorio Caruso prepared a gastronomic journey leading us in an exploration of the colours, flavours and traditions of Sicily. Dishes were a treat not only for the palate but also for the eyes, all perfectly paired with nectar of this historic winery. 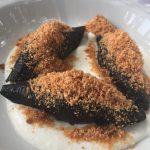 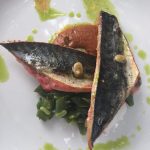 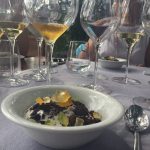